The subclinical ketosis is "invisible" and can only be detected by the measurement of the ketone bodies. The characteristics:

- Increased concentration of ketone bodies in blood
- No visible symptoms of a disease
- But already decreased performance, fertility disorders and increased risk for other diseases!
→ The production performance can therefore be decreased without any externally apparent symptoms of the animal! 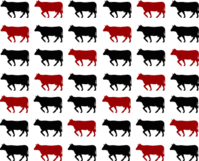 This website contains information on products which is targeted to a wide range of audiences and could contain product details or information otherwise not accessible or valid in your country. Please be aware that we do not take any responsibility for accessing such information which may not comply with any legal process, regulation, registration or usage in the country of your origin.